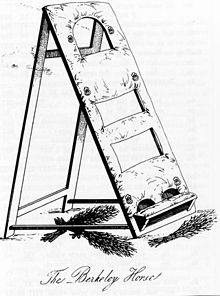 Theresa Berkley ran a high-class flagellation brothel in England at 28 Charlotte Street (which is today’s 84–94 Hallam Street). She was a “governess”, i.e. she specialized in chastisement, whipping, and the like. She invented the “Berkley Horse”, an apparatus that reportedly earned her a fortune in flogging wealthy men and women of the time. There are no artworks depicting what Theresa Berkley looked like, but occasional descriptions usually report that she was attractive, with a strong disposition. An expert with all instruments of torture, her talents became highly sought after by the aristocracy of the day. She was a master of the art of inflicting pain for pleasure, and practiced absolute privacy to protect her clientele. Her clients were said to have been both men and women of wealth, and her career was financially lucrative. Her fame was such that the pornographic novel Exhibition of Female Flagellants (1830) was attributed to her, probably falsely.

One writer said of her:

She possessed the first requisite of a courtezan, viz., lewdness; for without a woman is positively lecherous she cannot keep up the affectation of it, and it will soon be perceived that she moves her hands or her buttocks to the tune of pounds, shillings, and pence.

Quotes related to her deeds of domination and sexual torture

According to an unnamed source quoted by Henry Spencer Ashbee:

“Her instruments of torture were more numerous than those of any other governess. Her supply of birch was extensive, and kept in water, so that it was always green and pliant: she had shafts with a dozen whip thongs on each of them; a dozen different sizes of cat-o’-nine-tails, some with needle points worked into them; various kinds of thin bending canes; leather straps like coach traces; battledoors, made of thick sole-leather, with inch nails run through to docket, and currycomb tough hides rendered callous by many years flagellation. Holly brushes, furze brushes; a prickly evergreen, called butcher’s bush [?butcher’s broom]; and during the summer, a glass and China vases, filled with a constant supply of green nettles, with which she often restored the dead to life. Thus, at her shop, whoever went with plenty of money, could be birched, whipped, fustigated, scourged, needle-pricked, half-hung, holly-brushed, furze-brushed, butcher-brushed, stinging-nettled, curry-combed, phlebotomized, and tortured till he had a belly full.”

“Mrs Berkley has also in her second floor, a hook and pulley attached to the ceiling, by which she could draw a man up by his hands. This operation is also represented in her memoirs.”

She allowed a certain amount of torture inflicted on her by her clients, given that they were willing to pay her price, but she also employed a number of women for that task if her clients wished to inflict more pain than she was willing to take herself. As stated in the quote below:

“For those whose lech it was to flog a woman, she would herself submit to a certain extent; but if they were gluttons at it, she had women in attendance who would take any number of lashes the flogger pleased, provided he forked out an ad valorem duty. Among these were Miss Ring, Hannah Jones, Sally Taylor, One-eyed Peg, Bauld-cunted Poll, and a black girl, called Ebony Bet.”

Shortly after her death in 1836, her brother, who had been a missionary for 30 years in Australia, arrived in England. When he learned the source from which the property she had left him had been derived, he renounced all claim, and immediately went back to Australia. In default, the property was bequeathed to Dr. Vance, her medical attendant and executor; but he refused to administer, and the whole estate, valued at £100,000, was escheated to the crown.

Dr. Vance came into possession of her correspondence, several boxes, which was said to have contained letters from the highest aristocracy, both male and female, in the land. The letters were eventually destroyed.