Polyamory is the practice of having more than one romantic (and usually but not always sexual) relationship at once, with the consent of everyone involved. People who practice polyamory are called polyamorists, and practicing polyamory is called being polyamorous.

Origin of the word polyamory

The word polyamory combines the Greek word for many (poly) and the Latin word for love (amor). The word polyamorous first appeared in an article by Morning Glory Zell-Ravenheart, “A Bouquet of Lovers”, published in May 1990 in Green Egg Magazine, as “poly-amorous”. In May 1992, Jennifer L. Wesp created the Usenet newsgroup alt.polyamory, and the Oxford English Dictionary cites the proposal to create that group as the first verified appearance of the word.

Metamour: Another romantic (and usually also sexual) partner of someone’s romantic (and usually also sexual) partner is their metamour. For example, if a woman called Linda has a girlfriend and that girlfriend has a boyfriend, the boyfriend would be Linda’s metamour, and Linda would be his metamour. A metamour is sometimes called an other significant other, or OSO.

Polyfidelity: More than two people agreeing to only have romance (and usually also sex) with each other .

Solo polyamory: Solo polyamory is a type of polyamory in which an individual has more than one romantic (and usually also sexual) relationship without cohabiting or wanting to cohabit with any one partner.

Triad: Sometimes called a trio or throuple, this is a romantic (and usually also sexual) relationship between three people.

Metamour Day is celebrated every year on February 28. It celebrates the relationships people have with their metamours (partners’ other significant others, often referred to as metamours or OSOs.)

Polyamory Pride Day is celebrated every year on a day in Pride Month.

International Solo Polyamory Day is celebrated every year on September 24. Solo polyamory is a type of polyamory in which an individual has more than one romantic (and usually also sexual) relationship without cohabiting or wanting to cohabit with any one partner.

Polyamory Day is celebrated every year on November 23; that day was chosen because on November 23, 2011, the Supreme Court of British Columbia ruled that the anti-polygamy law of Canada does not affect unformalized polyamorous households.

The Canadian Polyamory Advocacy Association (CPAA) was founded in 2009. It “advocates on behalf of Canadians who practice polyamory. It promotes legal, social, government, and institutional acceptance and support of polyamory, and advances the interests of the Canadian polyamorous community generally.” [The quotes in this section are from the organizations’ websites.]

The Organization for Polyamory and Ethical Non-monogamy (OPEN) was founded in the United States in 2022 as “a nonprofit organization dedicated to normalizing and empowering non-monogamous individuals and communities.”

The Polyamory Action Lobby (PAL) was founded in 2013 in Australia to fight cultural misconceptions about polyamorous people and to fight for their legal rights.

The Polyamory Legal Advocacy Coalition (PLAC), based in the United States, “seeks to advance the civil and human rights of polyamorous individuals, communities, and families through legislative advocacy, public policy, and public education”. 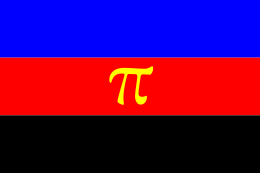 The first polyamory pride flag design was created by Jim Evans in 1995. He stated about it, “The poly pride flag consists of three equal horizontal colored stripes with a symbol in the center of the flag. The colors of the stripes, from top to bottom, are as follows: blue, representing the openness and honesty among all partners with which we conduct our multiple relationships; red, representing love and passion; and black, representing solidarity with those who, though they are open and honest with all participants of their relationships, must hide those relationships from the outside world due to societal pressures. The symbol in the center of the flag is a gold Greek lowercase letter ‘pi’, as the first letter of ‘polyamory’. The letter’s gold color represents the value that we place on the emotional attachment to others, be the relationship friendly or romantic in nature, as opposed to merely primarily physical relationships.”