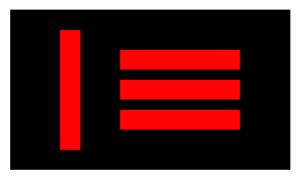 The flag was designed by Master Tallen then of Washington, D.C. with the assistance of his then slave, andrew, and also of D.C. girl. nancy of Lifestyle Sewing produced the first flag, which was displayed on the conference’s stage throughout the weekend.

Attendees at the conference were offered bumper stickers of the flag. The accompanying label reads:

This symbol was offered as a representation of the Dominant / submissive or Master / slave relationships. This simplistic design combined established ideogrammic symbols. The vertical stripe is a universal symbol meaning power or dominance. The set of three horizontal stripes is a universal symbol meaning passive or submissive. The flag is a basic black with a white border. The Dom/sub symbols are in red and in the center. The intent was to create a symbol that represents the foundation of the Master/slave dynamic that is based in authority-based relationships.

The Master/slave Community is related to the leather community, and it can be said that many in the M/s community are content identifying with only the Leather Pride Flag. However, the time came for the Master/slave community to have its own universal symbol of pride and unity. With the community’s acceptance, it was hoped that this proposed design would be adopted as that symbol.

More than a decade later, the community has embraced the Master/slave Flag. Since its creation in 2005, the Master/slave flag has been embraced nationwide and representations of the flag on pins and stickers can be seen at major events. Many Masters and slaves have included it in their websites and profiles. And the flag has been incorporated as parts of titleholders’ patches, family’s crests, and event symbols.

Since 2009, the Master/slave Conference is honoring the emblem by holding the “Master/slave Flag Breakfast” on the Monday (Labor Day) of the event. The breakfast always includes a guest speaker for a Q&A session. Past speakers include Viola Johnson, Laura Antoniou, Raven Kaldera and slaveboy Joshua, Master Skip Chasey, slave Rick, Mistress Susan and slave teagan, Sir Stephen and his Household, Master Taíno and Guy Baldwin.

Copyright of the Master/slave Flag belongs to Master Tallen but he has granted permission for the flag to be reproduced and disseminated by both community leaders and individuals.