Master David was a Master and active in the Leather Community for over half a century. He also had a long career in the US Navy as a Navy Seal. After receiving his doctorate in psychology, he be 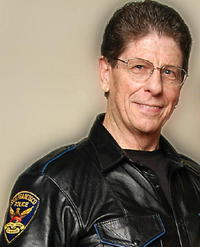 came a scene-friendly psychologist who made a difference for many kinky folks during his lifetime. He passed on July 5, 2017 at age 77.

Master David first developed his appreciation for “the fine art of SM” while growing up in the San Francisco Bay area. He swore to protect the values of a leather Master and was presented with his Master’s top in Hayward, California in 1969. He was a long-time contributor to safe, sane, pleasure-filled learning opportunities for adults to explore and expand their self-awareness. He was a friend to people of all ages and enjoys the diversity found in the lifestyle. Master David recognized that within the Master/slave dynamic “no one is perfect, but it is important to strive for excellence.”

Master David was the patriarch of Master David’s Leather family which consists of his slave and family members who are dedicated to living the leather values of honesty, integrity, loyalty, trustworthiness, resilience and community service.

Over the years, Master David employed his unique skill set to provide education, mentorship, and counseling to countless individuals within the community.

He was a leader of MAsT International serving as Director of Operations and as Deputy Director. He was the founder of MAsT: Baltimore and a member of MAsT: Washington. He was a long-time member of Black Rose and served as a Consultant to their Board of Directors. He also served as Vice-President of Baltimore Educational and Social Society (BESS) and as their Ombudsman.

In 2008, he was elected to the Board of Directors of MTTA, Inc., and served as its Vice-president until he retired in 2015.   He was instrumental in developing MTTA as a major educational organization to advance the Master/slave dynamic. Since 2007, he has served as a faculty member at the MTTA Academy. As Senior Counselor he assisted dozens of Masters and slaves in their journey. Those who received his counseling as well as those who saw his tireless work will remember the impact of Master David’s work in their lives at the MTTA Academy.

During his last decade, Master David taught at the annual Master/slave Conference (MsC). Since 2009 he has facilitated classes focusing on strengthening the M/s relationship and mental health issues within the M/s lifestyle. The success and impact of his Dealing With Depression class made it an annual part of every MsC.