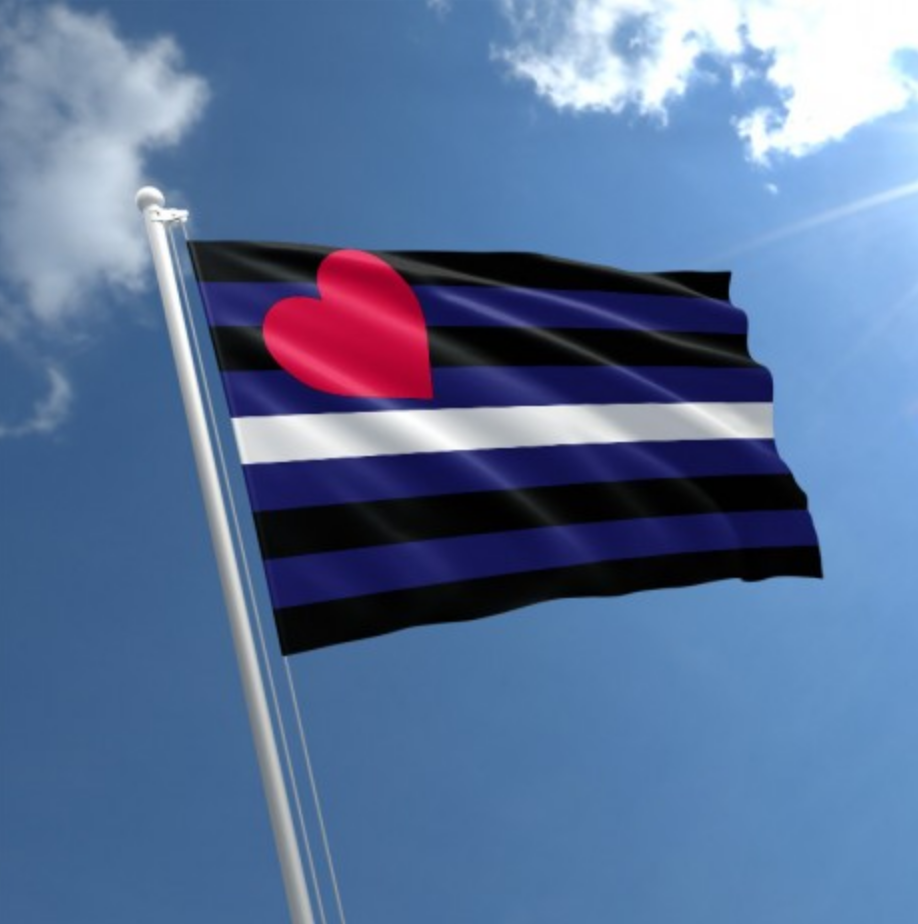 The Leather Pride Flag is a symbol used by the leather subculture since the 1990s. It was designed by Tony DeBlase in 1989, and was quickly embraced by the gay Leather community. It has since become associated with Leather in general and also with related groups.

The flag was designed by Tony DeBlase. He first presented the design at the International Mr. Leather event in Chicago, Illinois, U.S. on May 28, 1989.

Initial reaction to the flag was mixed. According to DeBlase’s article A Leather Pride Flag,

“Some, particularly on the east coast, reacted positively to the concept, but were quite concerned, some even offended, that I had not involved the community in helping to create the design.”

The original flag is on display at the Leather Archives and Museum.

Melbourne Leather Men Inc. (1991-2003) was the first club to incorporate the Leather Pride Flag design elements into their club colors.

Creator DeBlase gave this explanation of the design:

“The flag is composed of nine horizontal stripes of equal width. From the top and from the bottom, the stripes alternate black and royal blue. The central stripe is white. In the upper left quadrant of the flag is a large red heart. I will leave it to the viewer to interpret the colors and symbols.”

Although DeBlase is quoted as saying the design is copyrighted in the U.S. (as well as all countries where the Berne Convention standards apply), copyright is automatic, and need not be obtained through official registration with any government office. Once an idea has been produced as a tangible form, for example by securing it in a fixed medium (such as a drawing, sheet music, photograph, a videotape, or a computer file), the copyright holder is entitled to enforce his or her exclusive rights.

Various groups have adapted the design and sold it commercially or used it to represent different groups. For example, the Australian Leather Pride Flag is a variation on the leather pride flag. Leather & Grace, a now-defunct organization of Unitarian Universalist kinksters, combined a red flaming chalice with the stripes of the leather pride flag for their logo.