Throughout the years, Florida Leather & Fetish Pride has grown from a dream to a regional event, to what it has become now; a statewide weekend event that offers classes and has two contests.

In 2013, the event was purchased by Joe Mastrapasua. He expanded the weekend to encompass the whole state of Florida and never wavered from the goal of uniting Florida’s leather and fetish communities. New and more demos were added every year and they continued to offer those in the leather and fetish community a place to play by welcoming the Tampa Leather Club to be a part of the event. In 2014, the Florida Puppy Contest was founded when the International Puppy Contest moved to St. Louis. The event grew once more when in 2015 the first Mr. / Ms. Florida Leather n’ Fetish Pride contest was held.

Once again, the event was reborn in 2016 when Brenda Cothern took ownership. She moved the event from the Flamingo Resort to the Clarion Hotel in Clearwater, Florida. Over twenty classes and additional vendors were added to the demos and contest to expand the event and offer more for attendees. Other event producers, such as the Florida Power Exchange, Kinky Camp Out, and Critter Camp, hosted various aspects of the event weekend which further untied the leather and fetish communities in the state of Florida. The Florida Puppy Contest only remained a part of the event for 2016 due to the growth of its contest and the Mr. / Ms. Florida Leather & Fetish Pride contest.

Florida Leather n’Fetish Pride was shut down in 2019.

In 2018, FLFP added a Critter Contest to the weekend event so that those who identify as an animal (kitty, bunny, fox, etc.) could also have a platform to experience the aspects of competing for a title. The same year, the first Critter title holder, Pup Aechus (FLFP Critter 2019) and the producer Brenda Cothern created the first ever Critter flag. 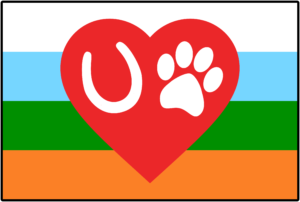 This flag design deliberately incorporated symbols and colors reflecting the history and character of Critters and Pet Play:

The goal of the Florida Leather & Fetish Pride weekend event is not only to unite the leather and fetish communities of Florida, but also to offer education in the various aspects of the leather, kink and fetish lifestyles. Offering a wide variety of classes is only one way the event weekend is doing just that. FLFP not only accepts experienced educators and judges, but also offers to teach those who wish to learn either role with the understanding that, just like the lifestyles lived, there is no one correct way to do either or both.

FLFP is a learning title in the aspect that contestants are not only taught how to win a title, but also how to teach the community about their leather or fetish platform, as well as, what is expected of a title holder to serve the community. FLFP title holders are expected to educate as many other community members as possible during their title year by attending and/or presenting at other events.

Interview – (Maximum 150 points, up to 50 points per judge, Olympic scoring): Each contestant will meet with the judging panel offstage in private to answer questions about the contestant’s interest and knowledge of leather and fetish topics, as well as, their willingness and ability to represent the title. Interviews will last no longer than fifteen (15) minutes each.

Speech – (Maximum 90 points, up to 30 points per judge, Olympic scoring): Each contestant will be given two (2) minutes onstage to give a speech. A ten percent (10%) deduction from the total speech category will be applied should the contestant exceed their allotted time.

Image & Pop Question – (Maximum 90 points, up to 30 points per judge, Olympic scoring): Each contestant will be asked a pop question onstage related to their respective leather / fetish persona based on the information provided on their application, in their interview, and in their educational class. Contestants will also scored on their image in relation to their leather / fetish persona.

Bonus Points – (Maximum 20 points, straight scoring): Each contestant has the ability to score an additional twenty (20) points if they sell an ad space for the program before the September 1 deadline.