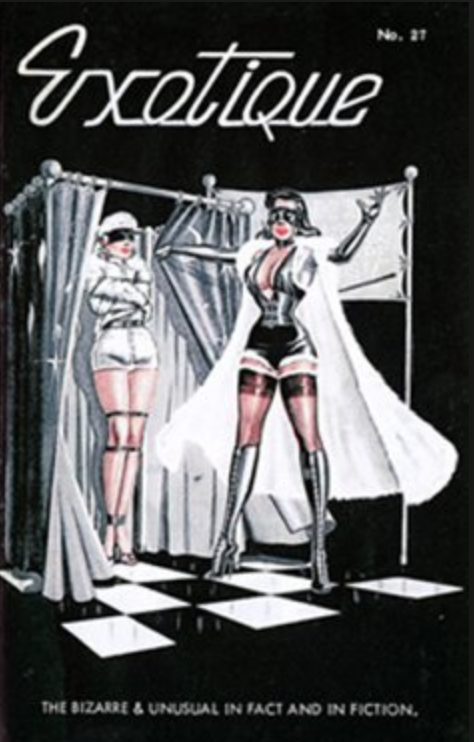 Fetish artists Eric Stanton and Gene Bilbrew, the latter also known by his pseudonym ENEG, were frequent contributors to this magazine and others produced by Burtman.

Exotique had no nudity, pornographic content, or even sexually suggestive situations. Nevertheless, much like fellow publisher Irving Klaw (a major influence on Burton) in 1957, Burtman would be targeted as a pornographer. He was relentlessly pursued by the U.S. Postal Inspection Service (acting as a censorship agency then) and local law enforcement (who functioned in coordination with Postal Inspectors and the Catholic Church). Eventually, he was arrested, his magazines and materials confiscated, and brought to trial. This led to the demise of the magazine in 1959.

However, starting in 1960, Burtman (under the Selbee Associates imprint) would go on to publish many more fetish magazines that were nearly identical to Exotique such as New Exotique, Masque, Connoisseur, Bizarre Life, High Heels, Unique World, Corporal (a pioneering spanking-fetish magazine) and others well into the 1970s.